I don’t know why I’m so enthralled by La Casa de Papel (I’m not even going near the English-version of the name, Money Heist, because it’s a sin how that was approved here in the US). After all, it has nothing in common with my top-two scripted shows on TV right now, the  universally acclaimed Better Call Saul & the Drake-acclaimed Euphoria. I’ve gone down a rabbit hole 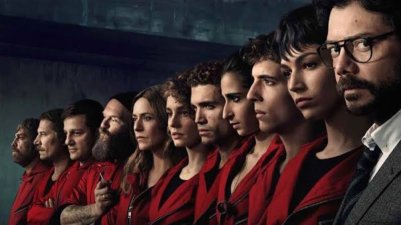 or two reading fan theories & critic opinions but nothing remotely close to the infatuation I currently have with this Spanish melodrama, telenovella (my new favorite genre), insert-any-other-dramatic-sub-genre.  I’ve even posted on Reddit about the show…REDDIT!

Quite literally, I’m obsessed. I’m Googling “how to date a woman in Spain without understanding the language.” I’m shopping for red jumpsuits (with accompanying masks) on J. Crew. I’m deeply investigating rumors & theories in a way I haven’t since Game of Thrones Season 4 or Westworld Season 1 (side note: I lost all of my respect for WW after they completely shattered an Aaron Paul opportunity). I’ve posted candid pictures of a real-life couple who met on the show to my IG Stories (the legend Jaime Lorente & the incomporable Maria Pedraza). I’ve even dreamed of partying with the cast knowing deep-down that we would be friends if we met (also would not hurt if we lived in the same city, I spoke Spanish, and I was also an actor on a show of global popularity).

Conventional wisdom does question my infatuation with the show. After all…

There is no singular reason why I overlook all of these flaws to stay up past 3am on a Wednesday (the latest I’ve been up by 2-3 hours in the age of quarantine).  It’s the complete package of unabashed fun, rich character development, nuanced aesthetics around culture & sex, and the impossible-to-quantify marketing of the show. Oh, and of course the drama. Every single moment is dramatic. When paired with my own personal zeitgeists (because well, this is my site, so of course I have to tie it back to me), I’m a hungry kid once again nourished in the Netflix candy store of entertainment.

1. The Romance (Even When Every Single Moment is Over-Dramatized)

During a time in the world when if you’re single it’s impossible to find any romantic semblance, how refreshing was it to see scene after scene of amorous moments — as if When Harry Met Sally and Fifty Shades of Gray had a Spanish baby with fake AK-47’s, origami & secret lairs. There was also something so damn European about the way vulnerability was expressed by both men & women throughout every season. Here in America, call it Saturday football routines or obsession with The Rock, but it’s still taboo to be a romantic, vulnerable man in this country. On Casa (and yes, there are still quite a few dirtbags on the show), we see scene after scene of mushy gushy lines filled with extended complements (I mean, calling your love interest a Maserati), marriage proposals within 20 minutes of meeting someone, and betraying your entire career path by falling for the heist leader. Whether it’s the “I want to know everything about you” or the “You give me reason to live; it’s like walking on the moon,” we can sense the purpose the creators are emoting for the viewer. Even though breakups, Rio outkicking his coverage multiple times, and first dates happen during the most inopportune times I’ve ever witnessed on a TV show, this makes it the beautiful soap opera we’ve been missing here in the States. A soap opera so open, so honest, so scintillating it’s hard to look away (even though if you do look away, make sure to pause the TV unless you speak Spanish).

Clearly, I’ve taken a certain interest in how we connect with others romantically, and even in my own dating life, I’ve made up at least 47 different fairytales where I boldly shout “Sei Bella” to a beautiful, Italian graphic designer in Brooklyn until six months later, we’re taking Salsa dancing lessons together, writing a screenplay, and booking flights to Italy, naturally. Watching La Casa di Papel validated this proposed path in my life (and also, who would have thought you don’t have to rob a Mint to make it happen).

2.  Character Development & Branding of Said Characters (Even When My Favorite Characters Are Pushed Aside for Disasters)

This show proved with great characters you can overcome catastrophic plot miscues. Each character has their nuances, quirks, psychotic tendencies, familial ties and so much more. Especially in the first two seasons, we see countless 1:1 dramatic monologues that help us better understand the origin story of each gang member: Denver’s childhood mishaps, Nairobi’s substance abuse issues, and even Rio’s former desire to please his parents as an IT professional. The writers brilliantly take us into the mind of each character and give us something to relate to (which in a show about a Spanish bank robbery, it’s no easy feat putting together relatable anecdotes for a more general audience).=

….Notwithstanding how each character’s city name (also, I call dibs on Milan) is, at the core, brilliant show business marketing. In a saturated-content world where even LeBron’s 5-year old daughter has a YouTube show, it’s important for creators to think outside-the-box when it comes to the branding of its characters to spark the social conversation (even thinking about the American hit, Stranger Things, the only character I actually remember is Eleven). We are infatuated with the characters on the show — picking sides, taking stands, starting fan pages. They are all complex, uncanny, contradictory and beautiful — or in other words, human.

What I tend to think about often is how social media paints 1% of the story of who we think someone really is — the ups & downs we deal with on a daily basis hidden from our followers, the unconscious anecdotes cultivating our personalities, and of course, how we all still yearn for belonging (um, hello, Zoom happy hours). Even with UpDating, we tend to cast individuals who obviously have the playful & “not-take-themselves-too-seriously” elements, but also have a layers & layers beneath the surface that an audience will want to learn more about. And in my own dating life, well, I’ve been told by my Rabbi a few times that I’m a character too. So who knows what will work for me down the road…

3. The Music & Dancing (Even Though The Timing can be Dreadful)

More than a song, it’s a lifestyle. A gateway into culture. A song you want to shout outside your balcony during the 7pm claps in New York City for our health care heroes. And a song I put on repeat at least 100 times after I heard it on La Casa (and followed with some version of losing my mind dancing on my bed drinking 4-day old red wine).

Song & dance & euphoria play such an integral part in Spanish culture and the show brings out these moments to the fullest extent. They serve as great changes in pace from the frenetic dialogue, and if you’re an audience member not clapping & dancing along, I don’t know what you’re on because these are some of the best moments of the entire show. I’m pretty sure my sofa is ruined from the amount of times I stood up to dance and party along with the cast.

A few of my favorite music scenes here:

I have music on 24/7 — one of those people that just always needs background music on. When you add in specific songs with hyped up energy to actually dance & vibe even in our quarantined apartments, I’m hooked. In fact, in my old Hinge profile, I even mentioned in the prompt “We have the same ‘weird’ when”…”we both randomly salsa dance while walking down the street. So clearly, this show was my kind of weird.

4. The Social Conversation & “It” Factor

This is the impossible-to-define, difficult-to-quantify, cool-to-discern X-Factor with hit TV shows or pop culture phenomenons.  It’s the reason global soccer superstar, Neymar, appeared as a priest in a forced, but somehow useful cameo (followed by this riveting discussion on fame with Neymar & Denver’s Jaime). It’s the reason why every single unknown actor or actress from the show is now well over 10 million IG followers when two years ago most were nameless. It’s the way you feel looking at those Dali masks with the red jumpsuits, now a universal symbol for the show (and for others, the anti-establishment).

This show has “it.” The world knows it, I know it, you’ll know it if you watch it.

I constantly am looking at trends in media, pop culture, entertainment to understand how a show spreads like wildfire. You could have all of the pieces together when it comes to timing, casting, branding, but if it doesn’t get people talking, then, the opportunity was wasted. This show had the perfect storm of the internationalization of TV, Netflix becoming well, Netflix, and the rise of the anti-establishment principles during this pandemic that has us thinking about the world (and its countless arbitrary rules & structures). More specifically, for us Millennials, man, was it refreshing to see fellow twenty something creatives in other countries take up arms (kidding), fall in authentic love (not kidding), and give their heart & soul to produce incredibly unique content.

So there you have it. La Casa de Papel is on Netflix now. Season 5 hopefully will be around the corner, and as for my next move, well, I just extended my geographic location on Raya to include Barcelona & Madrid.

Stay tuned to my blog for more takes on, well, everything from why FaceTime dates are a waste of time to what social life will be like post-COVID-19 to why peanut butter is the best snack on the market right now.